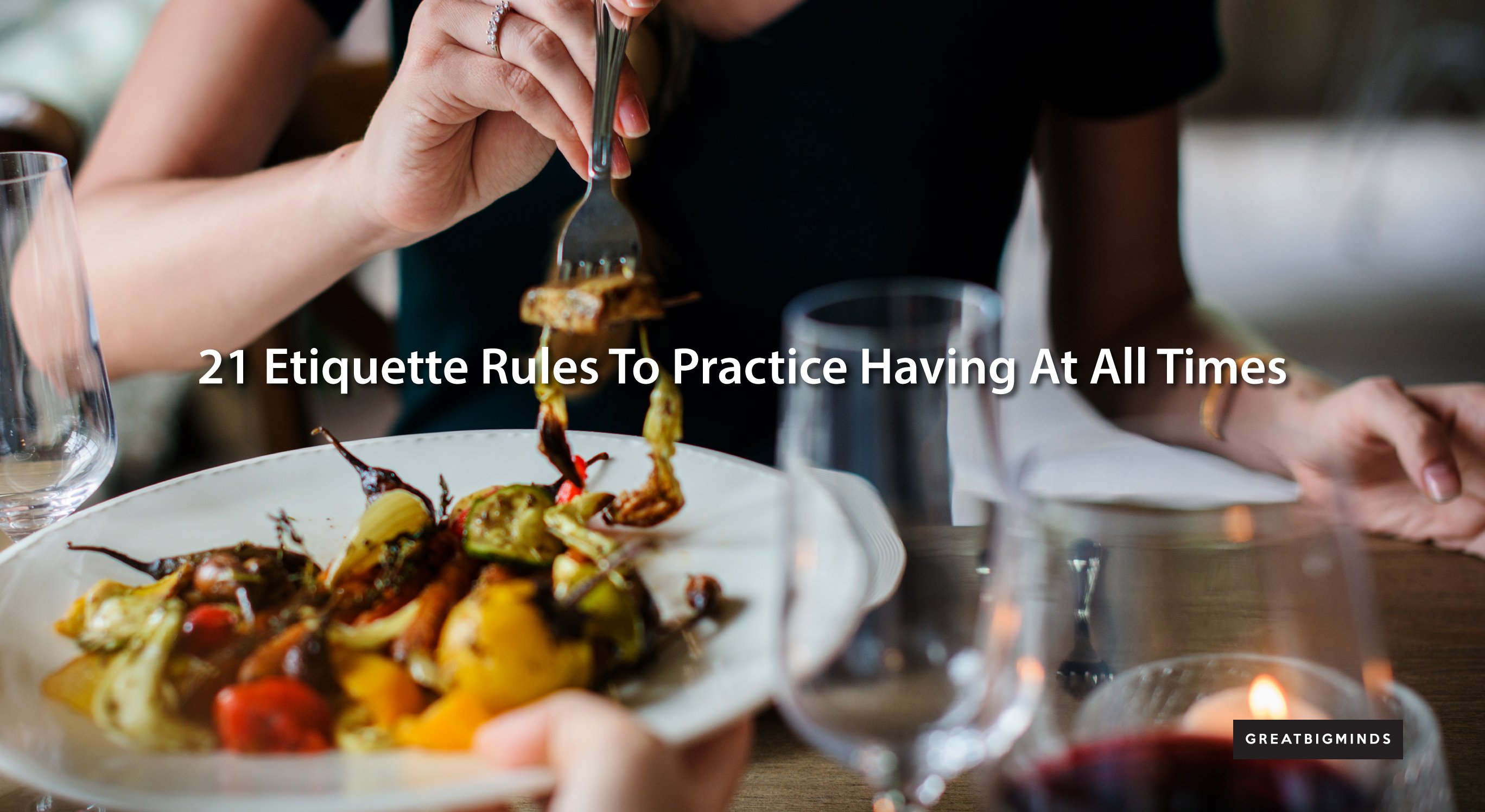 We define etiquette as a customary code of polite behavior in society or among members of a particular profession or group.

We’ve compiled together 21 etiquette rules we should all start practicing. It helps not only improve your own conduct in a manner where others around you will feel most comfortable with, good etiquette increases confidence as well.

Whether you’re in a gym, out for lunch, a birthday party or at work, these 21 etiquette rules will help you get by.

As you precede reading along the lines, you’ll notice a common countenance in all of them. That is, to think about how other’s feeling first because in the end, it is absolutely not all just about maximizing your own convenience.

1. When you are formally invited, respond timely. Don’t at any circumstances think that not responding to the needed RSVP meant the same as declining. If you can’t come, make sure you respond as so. At the very least, don’t RSVP at the very last minute for an event; especially when it involves real planning by the host.

2. Don’t agree to coming and later not showing up. It’s just plain rude and you could be costing the host a lot of money or taking up limited space whereby someone else could have had the opportunity to come.

3. Make it an effort to be punctual. It is always better to arrive early than late. If under any unforeseen circumstances that you’ll run late, take the effort to apologize and inform. However, ensure that it’s not being used as just an excuse to get by.

4. Show some respect and courtesy especially around shared-common appliances. For example, the office’s refrigerator: if you spot anything in it that doesn’t belong to you, don’t take it unless mentioned otherwise. Bin any leftovers or anything unwanted. Don’t hog and don’t leave anyone severely disgusted by what it may have turned into.

5. When offered a hand shake whilst you are seated, you should stand up and shake hands instead of remaining seated.

6. Don’t shout into any call-conversations. Firstly, people around you don’t need to know the details. Second of all, just because you can’t hear them well, doesn’t mean the people across the line can’t.

7. Turn off the phone or set it on vibration mode. It’s not very nice to interrupt the moment and making someone felt like you couldn’t be bothered with what others have to say. If you really must take that call, excuse yourself politely instead.

8. If you’re ever late, don’t feel like you’re entitled to shove your way through the front just so you’ll make it to your favorite spot.

9. When you’re in line for any sort of purchase, ensure that you’ve made up your mind for what it’s needed. Don’t tell the cashier or the barista to wait while you get your needed confirmation from the other side of the telephone conversation. Yeap, secretly, they hate you and so do the rest of the others behind.

10. Arguments and personal conversations; keep them off your social networking platforms!

11. Don’t breakup with someone via text. Don’t inform the death of any family member via social networking platform either. At times like this, it is due respected for parties involved to be informed through a phone call or a face-to-face conversation.

12. Don’t caps lock your entire text. Yes, it does feels like you’re shouting.

13. Unless someone specifically requested or hinted something from you, don’t lend or deliberately offer anything. They’re most probably too occupied to even get around with it but at the same time, they find it difficult to reject your kind gestures. At the end of the day, if the outcome is not as what you’ve hoped to be, you’ll only make yourself feel unappreciated.

14. If you’re invited to a party, prior to inviting anyone else apart from the host’s list, deliberately ask if that’ll be okay for you to bring someone along.

15. Don’t show up at a party empty handed. At the very least, bring a bottle of wine or desserts.

16. If you’re invited to a party, it’s always nice for the host to know you’re willing to help with cleanups. Trust me, they’ll appreciate all the help they could get after the ‘mess’ and dirty dishes everyone else’s left.

17. When you bumped into any friends, clearly seeing that they are in the company of a stranger, don’t offer yourself to join in unless invited.

18. When seated for a meal, keep items relatively not related with food off the table; example: keys, sunglasses, hand phones, clutch bags.

19. It is utterly rude that you ask for a check when obviously people at the table haven’t quite finished their food.

20. Don’t allow your personal preference be everyone else’s dilemma. Just because you’ll have to follow a strict dietary plan, doesn’t mean everyone else has to follow suit.

21. Around the elevator, let people off first before proceeding to enter. Same goes when exiting. Step out of the elevator and allow people from the back to exit and make your way back into thereafter.

Based on materials from Business Insider, BrightSide