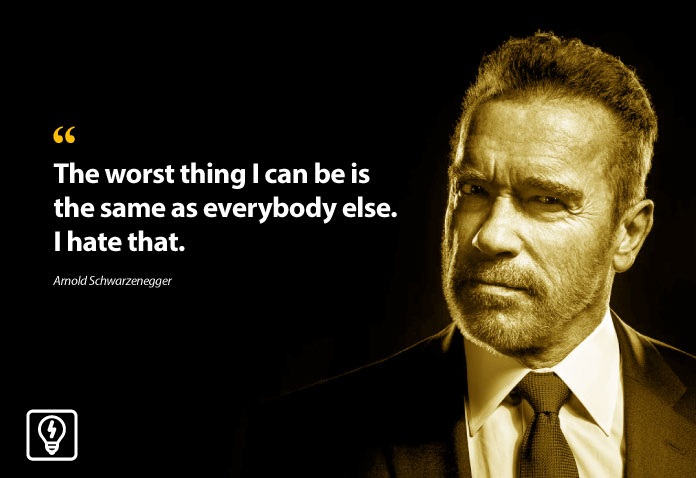 Arnold Schwarzenegger was born on 30th July 1947 in Thal, a small town in Syria. At age 20, he had made a name for himself becoming one of the youngest recipient ever to participate in the Mr. Universe Title. Fueled solely via his passion for bodybuilding and life in America, Arnold left home and emigrated to the States in 1968.

During his bodybuilding career, he successfully won five Mr. Universe titles and six Mr. Olympian crowns, which was an outstanding achievement; one that was unprecedented and unrivalled for. After his last Olympian win, he devoted himself to acting; setting his hindsight for Hollywood’s fame.

Soon enough, just like his bodybuilding career, his acting career exploded; securing roles after roles, winning a Golden Globe Award for Best Newcomer in his performance, Stay Hungry, and later on making Hollywood history in his role as The Terminator.

His achievements and dedication acts as a great reminder for us all that despite whatever your upbringing, you are capable of becoming more. You set your path to greatness in life. Through sheer determination, hard work and persistency, the life that you dreamed of can become a reality.

Here are the best Arnold Schwarzenegger quotes for inspiration.

Related: 50 Of The Best Life Quotes from Arnold Schwarzenegger

“For me life is continuously being hungry. The meaning of life is not simply to exist, to survive, but to move ahead, to go up, to achieve, to conquer.” Click To Tweet “When you have a well developed body and you're confident, you see people bending your way, wanting to be on your side, wanting to do things for you.” Click To Tweet

"If you work hard and play by the rules, this country is truly open to you. You can achieve anything." Click To Tweet

“The mind is the limit. As long as the mind can envision the fact that you can do something, you can do it, as long as you really believe 100 percent.” Click To Tweet

“You can't be paralyzed by fear of failure or you will never push yourself." Click To Tweet

“I never argued with people who underestimated me. If the accent and the muscles and the movies made people think I was stupid, it worked to my advantage” Click To Tweet “I would never exchange my life with anybody else's” Click To Tweet

“All I know is that the first step is to create a vision, because when you see the vision, the beautiful vision, that creates the want power.”  Click To Tweet