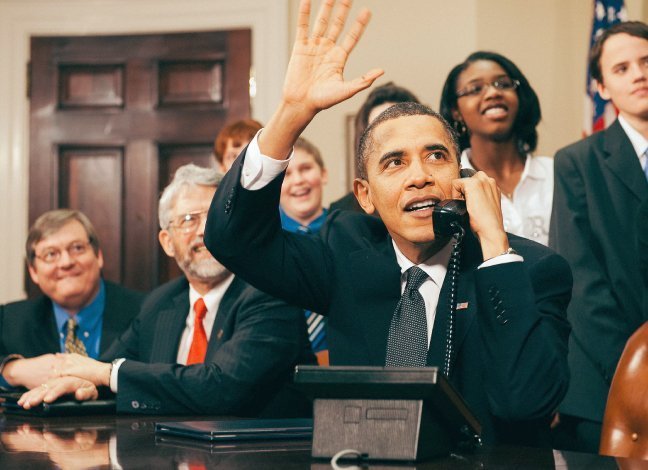 Barack Obama, hailed as one of the greatest and most influential President of the United States of America, his charismatic ability especially when it comes to public speaking is truly recognized.

Even though Barack Obama is no longer in service as part of the office, we believed these 55 Barack Obama quotes will continue to serve and inspire you.

Here are 55 of Barack Obama quotes that will inspire you.

1. “We did not come to fear the future. We came here to shape it.” -Barack Obama

2. “We still believe that this should be a place where you can make it if you try.” -Barack Obama

3. “Change will not come if we wait for some other person or some time. We are the ones we’ve been waiting for. We are the change that we seek.” -Barack Obama 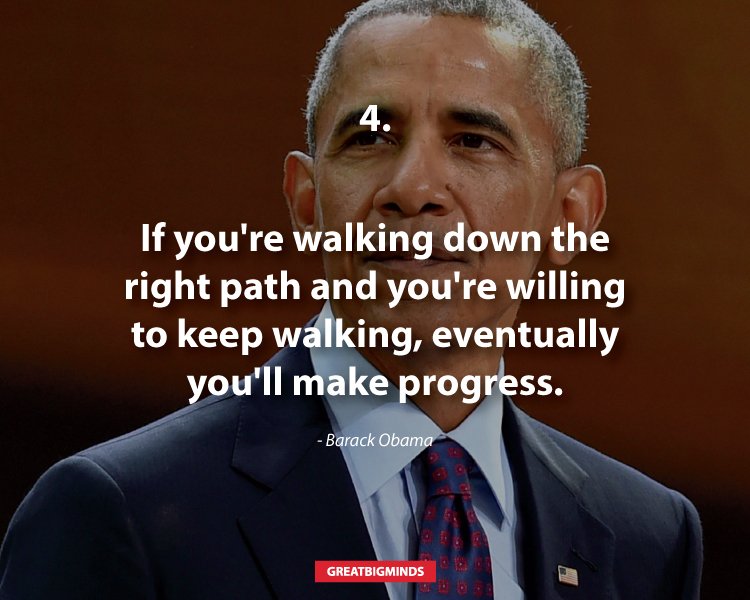 5. “Peace is not merely the absence of visible conflict.” -Barack Obama

6. “If you work hard and meet your responsibilities, you can get ahead, no matter where you come from, what you look like or who you love.” -Barack Obama

8. “Hope is the basis of our nation, the belief that destiny is written by us.” -Barack Obama 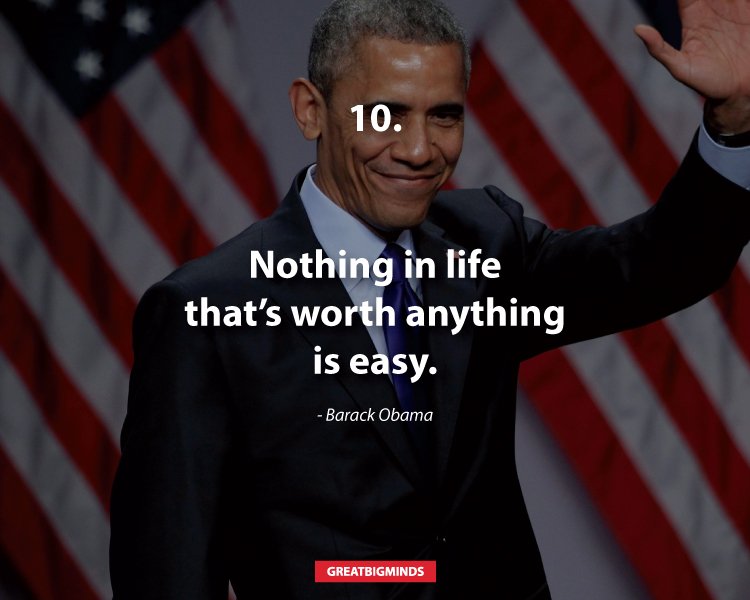 11. “Where we are met with cynicism and doubts and those who tell us that we can’t, we will respond with that timeless creed that sums up the spirit of a people: Yes We Can.” -Barack Obama

12. “Clear eyed, we can understand that there will be war, and still strive for peace.” -Barack Obama

“We should do everything we can to make sure this country lives up to our children’s expectations.” -Barack Obama

14. “The cynics may be the loudest voices – but I promise you, they will accomplish the least.” -Barack Obama

15. “Every woman should be able to go about her day – to walk the streets or ride the bus – and be safe, and be treated with respect and dignity. She deserves that.” -Barack Obama

16. “I believe marriage is between a man and a woman. I am not in favor of gay marriage. But when you start playing around with constitutions, just to prohibit somebody who cares about another person, it just seems to me that’s not what America’s about. Usually, our constitutions expand liberties, they don’t contract them.” -Barack Obama

17. “The cynics may be the loudest voices – but I promise you, they will accomplish the least.” –Barack Obama

19. “We need to steer clear of this poverty of ambition, where people want to drive fancy cars and wear nice clothes and live in nice apartments but don’t want to work hard to accomplish these things. Everyone should try to realize their full potential.” -Barack Obama

20. “We, the People, recognize that we have responsibilities as well as rights; that our destinies are bound together; that a freedom which only asks what’s in it for me, a freedom without a commitment to others, a freedom without love or charity or duty or patriotism, is unworthy of our founding ideals, and those who died in their defense.” -Barack Obama

“Four years ago, I promised to end the war in Iraq. We did. I promised to refocus on the terrorists who actually attacked us on 9/11. We have. We’ve blunted the Taliban’s momentum in Afghanistan, and in 2014, our longest war will be over. A new tower rises above the New York skyline, al Qaeda is on the path to defeat, and Osama bin Laden is dead.” -Barack Obama

22. “It was the labor movement that helped secure so much of what we take for granted today. The 40-hour work week, the minimum wage, family leave, health insurance, Social Security, Medicare, retirement plans. The cornerstones of the middle-class security all bear the union label.” -Barack Obama

23. “There is probably a perverse pride in my administration…that we were going to do the right thing, even if short-term it was unpopular. And I think anybody who’s occupied this office has to remember that success is determined by an intersection in policy and politics and that you can’t be neglecting of marketing and P.R. and public opinion.” -Barack Obama

24. “I began feeling the way I imagine an actor or athlete must feel when, after years of commitment to a particular dream…he realizes that he’s gone just about as far as talent or fortune will take him. The dream will not happen, and he now faces the choice of accepting this fact like a grownup and moving on to more sensible pursuits, or refusing the truth and ending up bitter, quarrelsome, and slightly pathetic.” -Barack Obama

25. “We may not be able to stop evil in the world, but how we treat one another is entirely up to us.” -Barack Obama

29. “We don’t turn back. We leave no one behind. We pull each other up” -Barack Obama

30. “Michelle’s like Beyoncé in that song. ‘Let me upgrade ya!’ She upgraded me.” -Barack Obama

31. “We need to keep making our streets safer and our criminal justice system fairer – our homeland more secure, our world more peaceful and sustainable for the next generation.” -Barack Obama

32. “Keep exploring. Keep dreaming. Keep asking why. Don’t settle for what you already know. Never stop believing in the power of your ideas, your imagination, your hard work to change the world.” -Barack Obama

33. “Just because we have the best hammer does not mean that every problem is a nail..” -Barack Obama

“Focusing your life solely on making a buck shows a poverty of ambition. It asks too little of yourself. And it will leave you unfulfilled.” -Barack Obama

35. “I think when you spread the wealth around it’s good for everybody.” -Barack Obama

36. “The value of social movements and activism is to get you at the table, get you in the room, and then to start trying to figure out how is this problem going to be solved.” -Barack Obama

37. “If you run you stand a chance of losing, but if you don’t run you’ve already lost.” -Barack Obama

38. “In the end, that’s what this election is about. Do we participate in a politics of cynicism or a politics of hope?” -Barack Obama

39. “Nothing in life that’s worth anything is easy.” -Barack Obama

43. “When ignorant folks want to advertise their ignorance, you don’t really have to do anything, you just let them talk.” -Barack Obama

44. “My identity might begin with the fact of my race, but it didn’t, couldn’t end there. At least that’s what I would choose to believe.” -Barack Obama

45. “We have an obligation and a responsibility to be investing in our students and our schools. We must make sure that people who have the grades, the desire and the will, but not the money, can still get the best education possible.” -Barack Obama

46. “Money is not the only answer, but it makes a difference.” -Barack Obama

47. “Take off your bedroom slippers. Put on your marching shoes,’ he said, his voice rising as applause and cheers mounted. ‘Shake it off. Stop complainin’. Stop grumblin’. Stop cryin’. We are going to press on. We have work to do.” -Barack Obama

48. “The thing about hip-hop today is it’s smart, it’s insightful. The way they can communicate a complex message in a very short space is remarkable.” -Barack Obama

49. “The shift to a cleaner energy economy won’t happen overnight, and it will require tough choices along the way. But the debate is settled. Climate change is a fact.” -Barack Obama

50. “In December, I agreed to extend the tax cuts for the wealthiest Americans because it was the only way I could prevent a tax hike on middle-class Americans. But we cannot afford $1 trillion worth of tax cuts for every millionaire and billionaire in our society. We can’t afford it. And I refuse to renew them again.” -Barack Obama

51. “We didn’t become the most prosperous country in the world just by rewarding greed and recklessness. We didn’t come this far by letting the special interests run wild. We didn’t do it just by gambling and chasing paper profits on Wall Street. We built this country by making things, by producing goods we could sell.” -Barack Obama

53. “On every front, there are clear answers out there that can make this country stronger, but we’re going to break through the fear and the frustration people are feeling. Our job is to make sure that even as we make progress, that we are also giving people a sense of hope and vision for the future.” -Barack Obama

54. “In a world of complex threats, our security and leadership depends on all elements of our power – including strong and principled diplomacy.” -Barack Obama

“When we don’t pay close attention to the decisions made by our leaders, when we fail to educate ourselves about the major issues of the day, when we choose not to make our voices and opinions heard, that’s when democracy breaks down. That’s when power is abused. That’s when the most extreme voices in our society fill the void that we leave. That’s when powerful interests and their lobbyists are most able to buy access and influence in the corridors of power – because none of us are there to speak up and stop them.” -Barack Obama